Oleg Pogudin was born in 1968 in Saint-Petersburg, Russia. From 1978 to 1983 he studied choral conducting at the School of Music. In 1990 he graduated from Russian State Institute of Performing Arts. He trained at the Eugene O'Neill Theater Center in the US within the programme "American musical". In 2009-2012 he studied vocal with Opera Centre’s Artistic Director, Galina Vishnevskaya.

For more than three decades, Oleg Pogudin has indisputably been one of the leading artists in the in the genre of romance and lyrical songs.

His repertoire includes nearly thousand works of different genres - Russian urban and classic romance, European stage hits, arias from operettas and musicals, folk songs, romances by P. Tchaikovsky, songs of  A. Vertinsky, B. Okudzhava and songs of the Soviet period, which form more than 20 thematic programs.
Performance geography covers 3 continents and more than 10 different European languages.
During his singing career he successfully collaborated with such orchestras as Moscow City Symphony - Russian Philharmonic and Tchaikovsky Symphony Orchestra of Moscow. Nevertheless, the majority of the artist performances are held with chamber ensemble, outstanding musicians, which the singer was lucky enough to bring together over the years.

With his work artist proves that romance, which is traditionally considered to be a chamber genre, could have an incredible success with multi-thousand audience.

Oleg Pogudin is, undoubtedly, one of the most striking and iconic figures in in an authentic contemporary Russian culture.
The singer has many different awards and titles, as well as awarded a number of honorary titles. 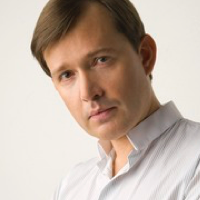